And now I say goodbye …

Thanks to the entire Bauhaus Dessau team for making this virtual encounter possible, allowing us to experience other perspectives of togetherness. Special thanks to Regina Bittner, Katja Klaus, Philipp Sack and Lilo Viehweg for giving me the freedom to write this blog.

Blog :: Andino says goodbye and I hope my words have allowed you to see with other eyes the transformation processes that researchers around the world, in the fields of architecture and design, are leading to somehow fight and demystify cognitive injustice … But let’s not forget that this journey has just begun!

In their presentation, Vivien and Aída actively integrated the participants of the micro festival. This activity was divided into 2 different exercises.

1st exercise: Vivien and the body (as I would call it)

For this activity, participants had to follow the movements of the artist, which consisted of moving the hands repetitively following a pattern, similar to packing and unpacking a cell phone and going through it like scroll down.

2nd exercise: Aída and the eyes (as I would call it)

For this, the participants downloaded a text/infographic referring to the practices of labor exploitation presented in the production lines.

To start, the participants had to choose an exercise and move along. After the first session, the participants should perform the other exercise. When I started I chose to follow Vivien and I thought, for me, that this was a reflection on my addiction to smartphones and a criticism of the monotony to which our body is exposed. In conclusion, I thought it was about ME!

At the moment of doing the activity with Aída, I realized that it was not about ME, it was about the US as a COMMUNITY, about those who are behind the whole universe of objects that surround us, and how these are produced for our consumption.

Thanks to Aída and Vivien for reminding us that it’s not about ME but always about US! 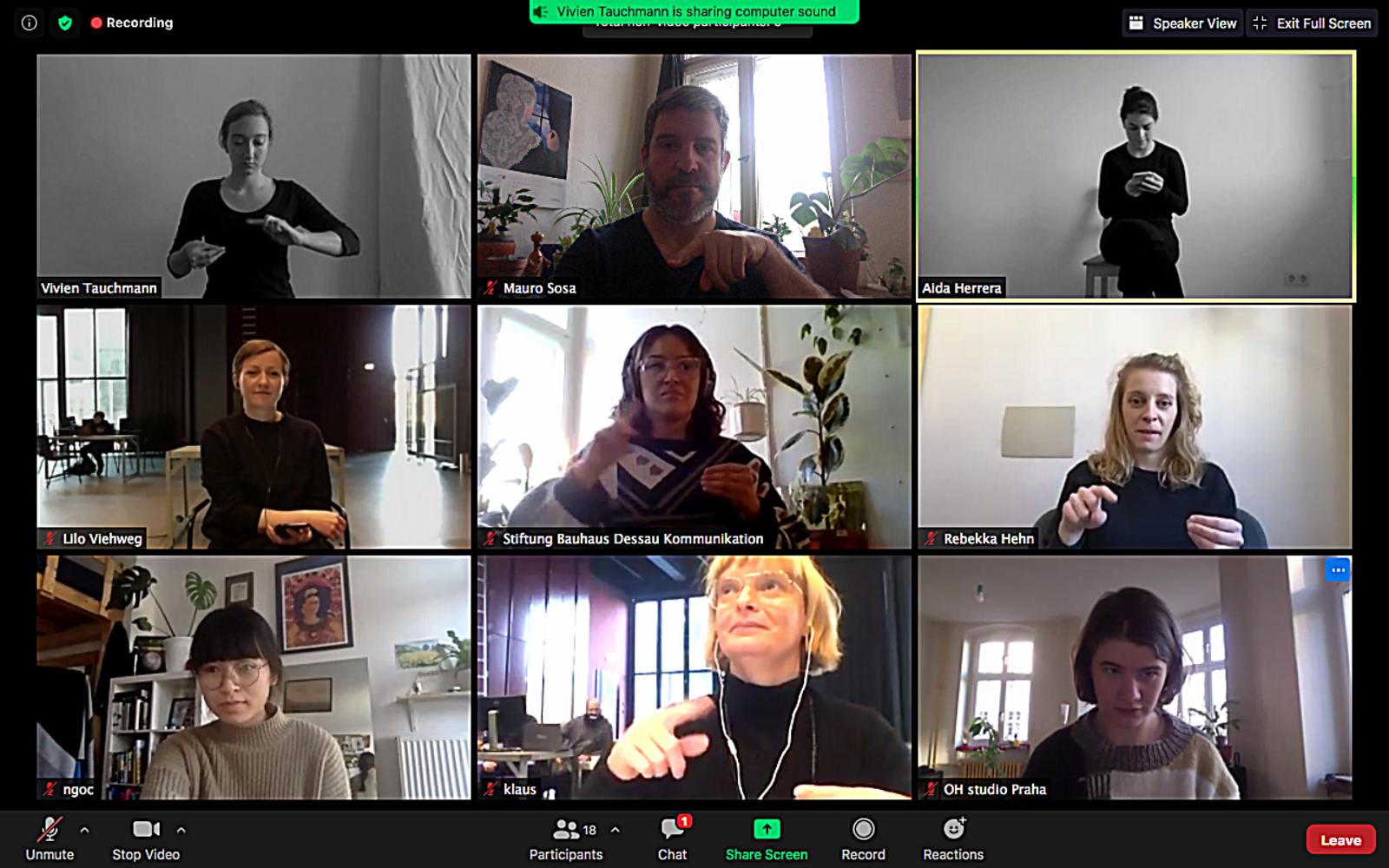 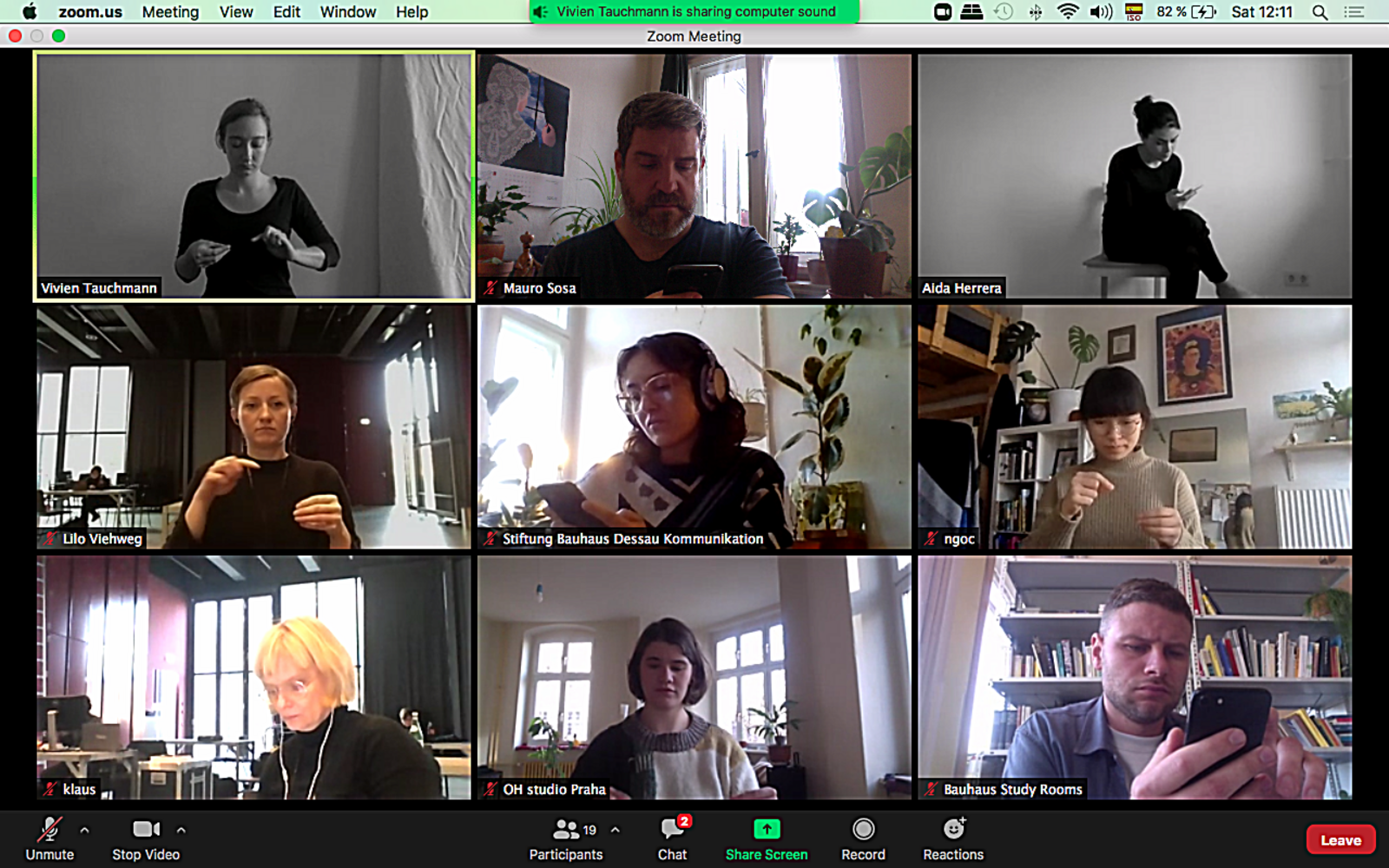 Co-Habitation: Between the Known and the Unknown"

Where to start? … I would say this panel has to be one of the highlights of the whole event, for me personally, and I will try to do it justice within this text.

This powerful discussion started with contextualizing the term “Co-Habitation” as a challenging discourse arising in the humanities around the term of the Anthropocene, which found its way into the new dialogues of architecture and design, leading to a paradigm shift.

The panelists gave an account of their own experiences investigating design cases and design history related to the transformation of practices in the ways of learning, understanding and practicing design from realities beyond the western understanding, as well as presenting how European designers meet the Indian culture from a hierarchical position as in the case of Aicher, that confronted with the extreme poverty of the place, gave a design response to a housing problem disregarding entirely the ways of existing and their Vernacular architecture. The panelists made it clear that the practice of designing for others you don’t know should be a political question… and yes, it is!

Neglecting other ways of existing is a powerful practice to keep marginalizing other bodies of knowledge that are not exactly embedded in the western-academic realm.

Moving forward, there is a fascinating case study where there is an intend of finding Co-Habitation spaces between western and non-western knowledge which is the National Institute of Design (NID) in Ahmedabad. As we all know for much of its modern history, India was under a British colonial rule and, although every colonial regime acted very differently in every place, they were still a colonized nation. The NID found a way to, not only negotiate with their new structures of knowledge but they gave space and acknowledgment to their craftspeople giving them the same status as the designers within this institution.

This excellent panel was a delight for those who somehow ask themselves about cognitive injustice in design. To wrap up I would like to leave you with some questions that were present during the panel conversation:

> Is decolonizing a verb? Or should we be talking about deconstructing colonial practices instead?
> How to perceive the Vernacular as something that must be embodied in our practices, rather than something that has to be overcome?

…………… what are the narratives hidden behind design history books …………… 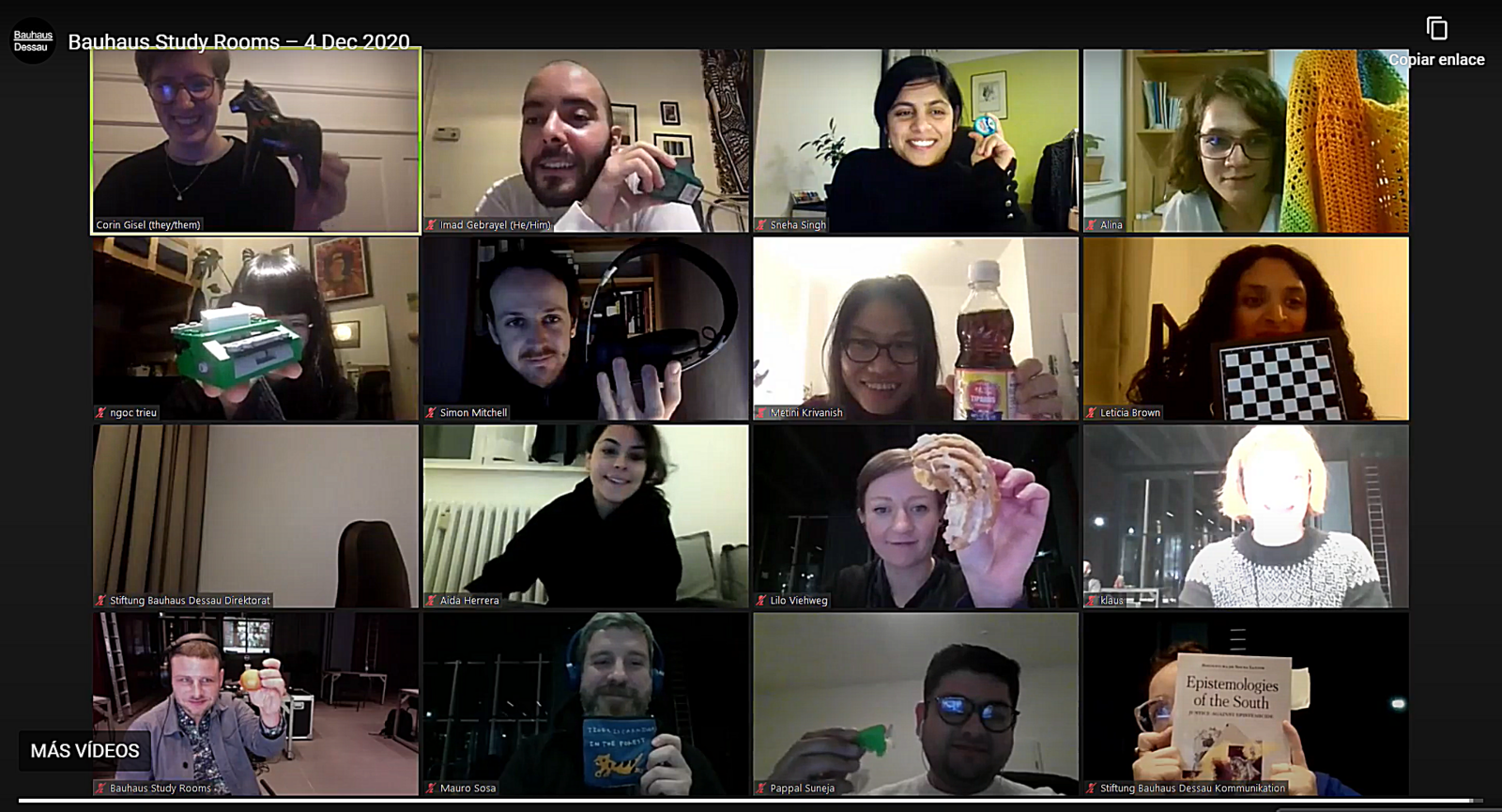 …………… language is a powerful tool to deconstruct western narratives ……………

Building as a Social Process

The three young and exciting researchers (Adam, Roohid, and Denisa) took us on a journey starting at the ruins of Warsaw in 1946 and with the notion of ruination (Stoler), going through the HDB Housing project in Singapore and landing on the playgrounds of Amsterdam. Thank you, Internet!

There is a meeting point between the ruins of Warsaw and the HDB Housing in Singapore, which is the fact that these two geographical locations experienced the aftershock of imperial presence and colonial occupation. The “vernacular” had to be rewritten and reinterpreted, not only by the architects involved actively in the new cities but, in the case of Singapore, also by the inhabitants, who redefined the space through their habits and practices, especially public spaces like playgrounds. Here is when we enter the world of Van Eyck through Denisa’s eyes. The playgrounds as children’s societies are places of networking that were only multiplied around the city thanks to the participation of the citizens and their collaborative approach.

Deconstructing western systems of marginalization doesn’t take one individual but a community! 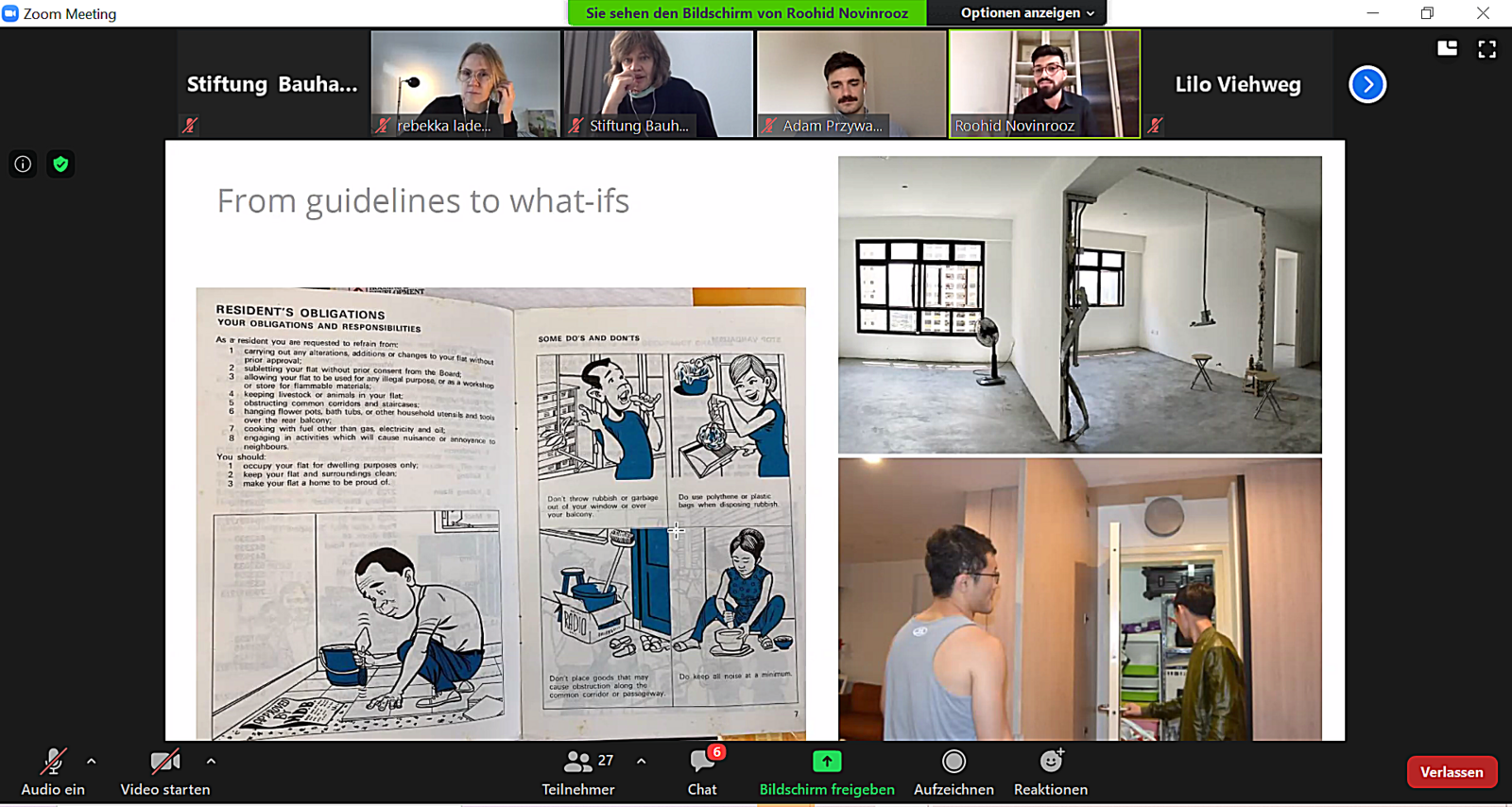 A Bigger Body of Existence – SLAMETAN!

Rituals are to be found all over the world, in different forms and different representations. But there is a common ground where all rituals meet, which is from my perspective, the need of connection and togetherness, not only with individuals but with metaphysical symbols of energies which bring some kind of sense of being part of a bigger body of existence besides our own.

Every culture has objects, movements and sounds that help building their own ritual practices. Gudskul invited us into their opening ritual called SLAMETAN. By allowing us to be part of their praying practices and modes of Ritual, they opened a door into their cosmogonies. Their singing ritual filled the room with energy and allowed me to be awake on this cold winter morning!

Something special caught my attention and it was the reaction of one of the participants who found the second part of the ritual “aggressive”. The choice of words is always a critical part in communication and specially while being invited to a foreign space. It is important not to continue perpetuating colonial language to define ritual practices of spaces that may be external to our own culture.

Maybe I better ask myself:

What is the influence of clothing, objects, and matter on performing a ritual?

What is the importance of togetherness and rituals in the context of “home”? 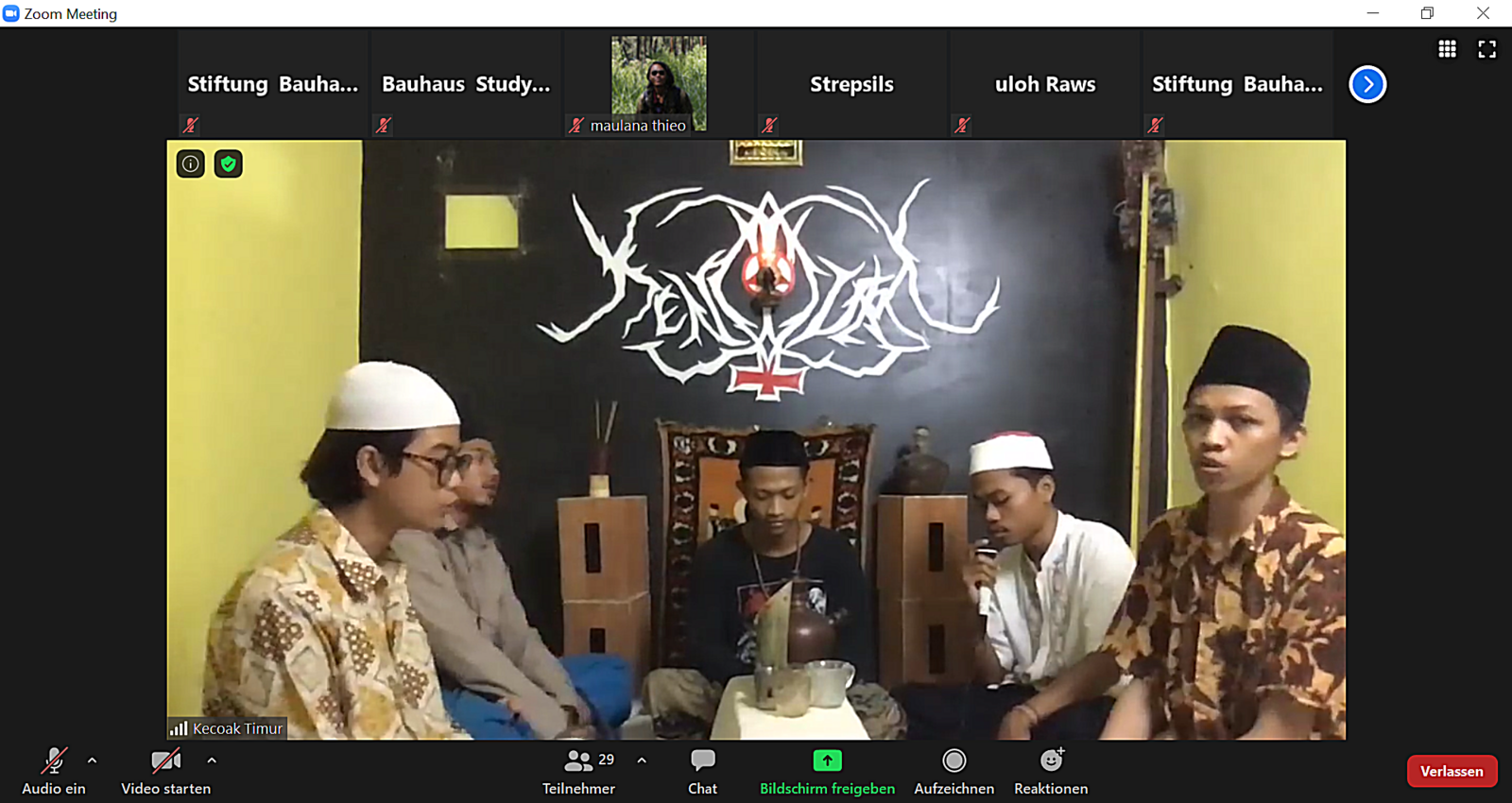 This house is your house vs. Hospitality

About Maison Sesame
Space and collective living to find solutions to the question of hospitality in the region of Northern France
Léa Janvier as one of its members was respondent of: A Concrete for the “Other Half” // Symposium (watch here)
3 Dec 2020, 3 – 5:30 pm
published: 3 Dec 2020, 11:10 pm

Maison Sesame is a private project that was initiated as a response to the migration crisis in Europe, more exactly in the north of France. Maison Sesame came to life with the idea of providing a more sustainable shelter and with the focus of making people, that is in a situation (as I would call it) of forced displacement, feel at HOME. It is important to highlight the efforts of citizens who respond to housing problems in order to generate a more humane and social atmosphere during times of crisis. Empathy is something that in architecture and design should be encouraged and understood as one of the pillars of action.

On the other hand, it is relevant to understand the privileged position from which these citizens are acting. Although they are aiming to create cohabiting spaces, where all should feel at home, there is a clear hierarchical situation between the guest and the host, which brings us to the dilemma of “This house is your house” vs. Hospitality.

Hospitality is the act of being friendly and welcoming to guests and visitors, therefore there is a coexisting dilemma between creating a space where the guest can feel at HOME, and being invited into a system with a Hierarchical structure.

While emphasizing the importance of human empathy I ask myself this question:

Can I feel at home while being a guest in a situation of forced displacement? And is HOUSE = HOME?

Mota’s inspiring presentation brings some insides into the critical part of the challenges in pedagogy in relation to the field of architecture. With the focus on the “archaeology of the everyday”, he underlines the importance of developing an understanding of social responsive design and the relevance of a meaningful communication throughout the design process.

The current way of preforming architecture, specially the question of developing affordable housing, consists in providing solutions from a financial-efficient perspective, leaving no space for architects to dwell into the problematic from a social and communal context.

In his research, site survey has a key role in order to decode spatial and social practices, using methods such as drawings and writings to enable the architectural students to develop a narrative of the everyday life, something that then would become a visual ethnographic representation. One of the topics that caught my attention the most, was the idea of decolonizing mapping and design methods using visual ethnography as a tool.

Understanding ethnography as a Western method to analyze the world, how do we or can we decolonize cultural perspectives using the same colonial tools and discourses?

All Archives Are Design Archives

Catherine Geel presented us with a broad perception of the paradigms and challenges surrounding the practice of archiving and specially digitizing design archives. There was a strong focus on the Archive as a space, saying that this special place separates the individual from the image or object.

Looking into the “Paradigm of the Clue”, as called by Geel, the Archive is the place of clues and not the place of trues. Therefore, the Investigator (Historian) is the one decoding the way an object will be read. So it is in the hands of the Investigator to define, in a way, the personality and perception that an object will have in a social context.

This brings me to the question: How can we fight cognitive injustice (Wallerstein) in postcolonial times, deciphering objects only through western standards of analyzing and documenting processes? 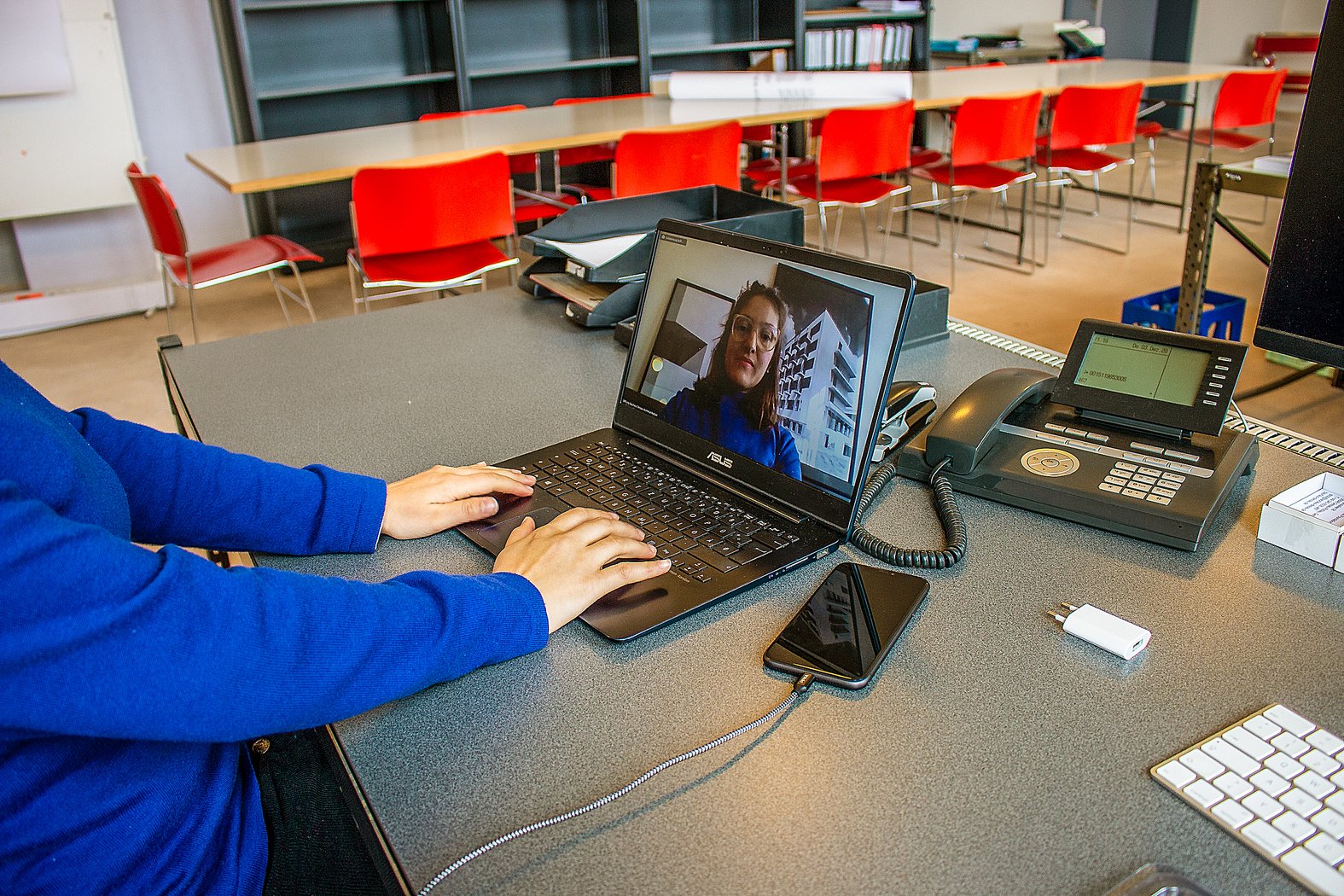 I am Valentina Buitrago, a Colombian product designer and design researcher based in Berlin, and also the human behind Blog : : : Andino. I was kindly invited to be part of Bauhaus Study Rooms 2020 as a sort of narrator to bring to you some of the insights and collective thoughts we will be seeing and living during these 3 days.

I come from the Andean mountains, hence the name of the blog. Since my studies, I have been interested in Design Anthropology and the understanding of non-western discourses in design practices. Approaching other types of cultural dialogues led me to focus on the work of artist and designer Anni Albers and her understanding of indigenous knowledge.

During these 3 days I intend to create a critical narrative, to understand how realms conceived from/for the Western system, can somehow generate spaces of coexistence with non-Western knowledge and practices. You will find my contributions to selected parts of the programme shortly after the end of the event here.