During the Weimar Republic there was an acute shortage of affordable housing. Overcoming this shortage called for the involvement of the public sector in order to provide affordable housing under the premise of ‘light, air and sun’ for a large share of the population. The construction of the Dessau-Törten Housing Estate was thus commissioned by the city of Dessau in the framework of the Reichsheimstättengesetz (Homestead Act). The estate was conceived by the Bauhaus as a solution for cost-effective mass housing.

The estate of terraced houses designed by Walter Gropius and built over three phases of construction comprised 314 terraced houses with floor spaces measuring from 57 to 75 m2. Each house had its own kitchen garden measuring from 350 to 400 m2 to grow vegetables and practice animal husbandry, thus promoting self-sufficiency. 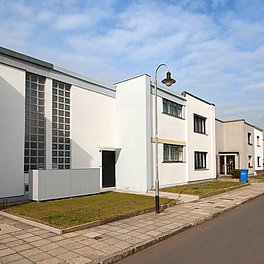 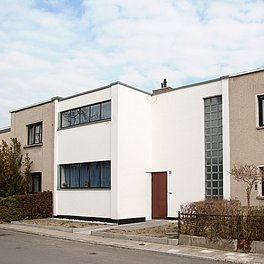 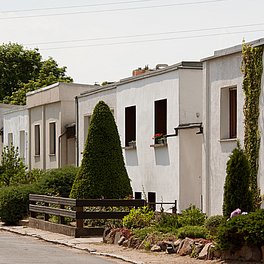 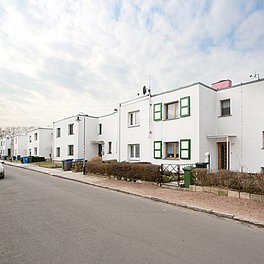 The estate included diverse housing typologies. As part of a trial, the Reichsforschungsgesellschaft für Wirtschaftlichkeit im Bau- und Wohnungswesen (German Reich society for economic efficiency in building and housing) wished to study the rational manufacture of residential housing as well as the suitability of new building materials and industrial products. The building site was organised like an industrial production line. Specialised labour brigades built several houses simultaneously during one construction phase. Building components such as the so-called Rapidbalken (precast concrete joists) were made on-site and transported with a small wagon and by crane. 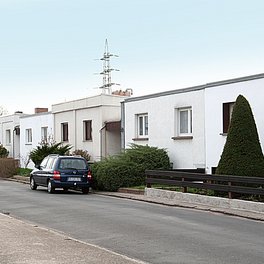 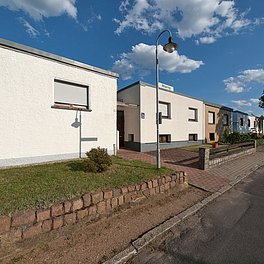 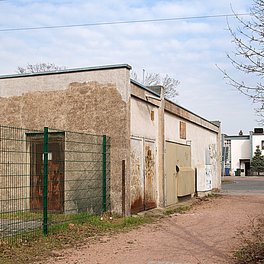 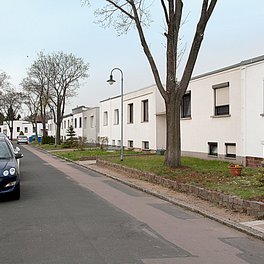 The light-coloured cubes were arranged as pairs of semi-detached houses, the layout of one a mirror image of the next, in groups of four to twelve units. The facades were subdivided by vertical and horizontal strip windows. The construction of the houses was governed by the imperative of building in a cost-effective manner. Load-bearing walls were built using prefabricated slag concrete hollow blocks and the floors with reinforced concrete beams. Light tones were used for the interiors. The Bauhaus also advertised furnishings for the interiors, but there was no demand for these items. 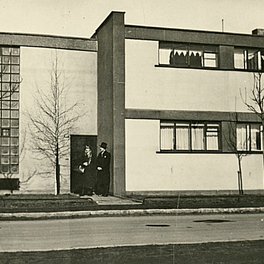 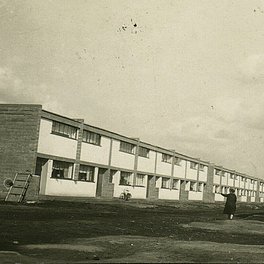 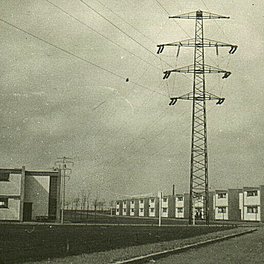 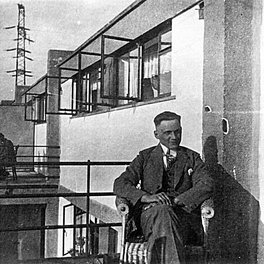 That little trace remains today of the original homogeneity of the estate is due to flaws in construction and design, which have been redressed by owners and residents. Only the too-high strip windows were modified according to a consistent plan. The first house was restored to its original condition in 1992 and is located at Mittelring 92. This is currently used by the Moses-Mendelsohn-Gesellschaft and is open to the public, as is the house at Kleinring 5. Since 1994 a maintenance and design statute ensures that any structural measures taken are in harmony with the historical substance.

Walter Gropius' Konsum Building, constructed in 1928, now introduces visitors to the history of the estate. A permanent exhibition provides insight into the idea and vision, the construction history and residents. The exhibition is sponsored by the Kreis der Freunde des Bauhauses e. V.